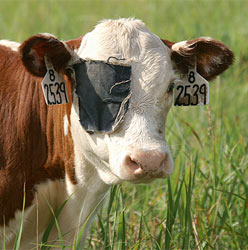 With warm weather approaching, thoughts of many cattlemen around this area have turned to pinkeye, one of the most common and economically damaging cattle diseases. Pinkeye, the common name for infectious bovine keratoconjunctivitis (IBK), is a contagious disease causing inflammation of the cornea and conjunctiva. If left untreated, severe damage to the eye may occur. Estimated losses each year are around $150 million due to lost weight gain, reduced milk production, treatment costs, and potential price discounts for affected animals. The moisture that the majority of South Dakota has received this spring and early summer has gone a long way in initiating much-needed forage growth. However, moist conditions and lush forage can create optimal conditions for pinkeye, as wet weather typically increases the incidence of face flies that irritate eyes and help spread the disease. In addition, tall grass can irritate eyes when cattle lower their heads to graze.

Preventing the disease typically requires a multi-pronged approach including vaccination, fly control, and managing the grazing environment. For more information about preventative measures, please refer to the following iGrow articles: Think about pinkeye prevention for the coming summer and Fly control/pinkeye prevention needs to be continuous. Even if preventative measures are in place, it is important to be able to detect and treat pinkeye early. Following are some signs of early, active, and healing stages of the disease, in addition to specific treatment recommendations.

Early Stage
Symptoms: The progression of clinical signs of pinkeye are consistent. Within the first three to five days after infection, cattle blink frequently and have excessive tearing, in addition to redness in the conjunctiva (white part) of the eye. Cattle in this beginning stage will often seek shade, typically decreasing the time they spend grazing. Pain may also contribute to reduced feed intake. After a day or two, these signs progress to a small ulcer in the center of the cornea which appears as a small white spot. The cornea develops a cloudy blue-grey appearance due to inflammation. One or both eyes may be affected, and the eye(s) are often held shut due to pain.

Treatment: The key to treating pinkeye effectively is to treat early. The goal of early pinkeye detection and treatment is to eliminate the causative agent (most typically Moraxella ) by using long-acting antibiotics, often tetracycline. Commercially available non-antibiotic antibacterial topical treatments may also be effective in helping to alleviate pain and discomfort and speed the healing process. Producers should consult with their veterinarians to determine optimal treatment strategies for individual situations. If there appears to be an outbreak in your , your veterinarian may recommend using sterile swabs to take samples from affected eyes, in order to grow the causative bacteria for an autogenous vaccine. Autogenous pinkeye vaccines, as well as over-the-counter vaccines, have not uniformly resulted in complete protection from the disease, but may be useful in certain situations.

Active Stage
Symptoms: If left untreated in the early stage of the disease, the ulcer will continue to spread across the cornea, and the eye will become increasingly cloudy. Blood vessels from the outside of the cornea begin to grow to help with healing, which gives the cornea the classical pink appearance. The ulcer will eventually cover most of the cornea and the inflammation will spread to the inner parts of the eye. If this occurs, the inside of the eye fills with a pus-like substance called fibrin that gives the eye a yellow appearance. Rupture of the eyeball is rare but may occur with a severe infection.

Treatment: Aggressive treatment with long-acting antibiotics are critical at this stage of the disease in order to prevent any further damage. Additionally, there is some evidence supporting the use of injectable penicillin in the external layer of the bulbar conjunctiva (white of the eyeball). A veterinarian should perform this procedure, as improperly placed injections may be ineffective and result in further damage to the eye. Protecting the eye from sunlight by applying an eyepatch can also be very important since ultraviolet rays can activate enzymes that can increase eye damage. This will also reduce shedding of bacteria. If the animal is in a pasture situation where keeping the patch on can be a challenge, construction adhesive can be used instead of the traditional eyepatch adhesive; however, it may be necessary to catch the animal to remove the patch. Also, eyes covered with a patch cannot be further medicated or monitored. Some veterinarians may prefer to suture the eyelid shut if the corneal ulcer is deep and appears likely to rupture. When treating eyes, one should wash hands or change gloves between affected animals to avoid spreading the bacteria further.

Healing Stage
Once the causative agent is eliminated, the ulcer is quickly covered by epithelium and the eye becomes less painful. Excessive tearing and blinking will subside and blood vessels will recede, but the eye may continue to be a cloudy blue color for one to two weeks. Once this healing occurs, the eye no longer requires antibiotic treatment. Clearing of the edema will begin at the outside edge of the cornea and sight will begin to return. The eyes of most infected cattle heal within 60 days, but may result in a white scar that can remain for the lifetime of the animal.

The most effective way to deal with pinkeye is to stay ahead of it by integrating prevention with broad-based treatment strategies developed in conjunction with a veterinarian as part of a herd health management plan. For more information about the disease, please search contact your area SDSU Extension Cow/Calf Field Specialist.